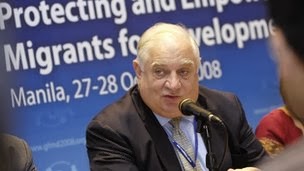 Sutherland strongly advocates liberal immigration policies and mass immigration into the European Union. Sutherland gave his opinion to the UK’s Lords home affairs committee on the 21st June 2012 as being (a) that “at the most basic level individuals should have freedom of choice” about working and studying in other countries and that EU states should stop targeting “highly skilled” migrants (and, conversely, placing restrictions on low-skilled migrants). Sutherland also argues (b) that migration is a “crucial dynamic for economic growth” and that this is the case “however difficult it may be to explain this to the citizens of those states”. Sutherland’s stated opinions on policy were (a) that "it was fundamentally important for states to cooperate on migration policy rather than developing their own policies in isolation as 'no state is or can be an island'"[34] (b) that multiculturalism is both inevitable and desirable: “It’s impossible to consider that the degree of homogeneity which is implied by the other argument can survive because states have to become more open states, in terms of the people who inhabit them” and also (c) that “the European Union, in my view, should be doing its best to undermine” any “sense of our homogeneity and difference from others”.[35]

Sutherland restated his view in the syndicated article co-authored with Cecilia Malmström entitled “Immigration challenge: Europe’s politicians should accept diverse social communities”, the opening paragraph of which declares:
“Europe faces an immigration predicament. Mainstream politicians, held hostage by xenophobic parties, adopt anti-immigrant rhetoric to win over a fearful public, while the foreign-born are increasingly marginalized in schools, cities and at the workplace. Yet, despite high unemployment across much of the Continent, too many employers lack the workers they need. Engineers, doctors and nurses are in short supply; so, too, are farmhands and health aides. And Europe can never have enough entrepreneurs, whose ideas drive economies and create jobs”.[36]
Sutherland and Malmström also argue in the above article that “Last year, during the Arab revolutions, the EU missed a historic opportunity to begin weaving together the two sides of the Mediterranean.” Sutherland is also quoted as arguing that opposition to greater globalisation is "morally indefensible".[37]