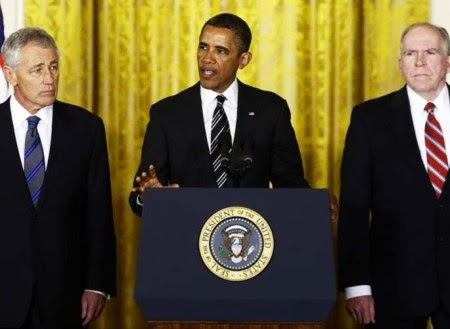 President Obama has chosen two Islam friendly Americans to serve as Secretary of Defense and CIA-director.

US President Barack Obama has named Chuck Hagel to be his next defense secretary and counter-terrorism adviser John Brennan to lead the CIA. Chuck Hagel is a committed anti-Zionist, who looks on Israel as the very troublemaker in the Middle East. John Brennan has embraced Hizb”Allah as the very well wishers of Lebanon.

Together Brennan, Hagel and Obama is the perfect team. They will surely work hard together with the Muslim Brotherhood to remove the “illegal settlements of Jews” who put the whole World at risk.

Hagel: U.S. should give up nukes before rogue nations
Read more at http://www.wnd.com/2013/01/hagel-u-s-should-give-up-nukes-before-rogue-nations/#SmbvZm4tKdAv0ipu.99